Body structure is closely similar to a standard Hybrid's, but more heavyset.

Advanced Hybrids are a superior strain of the Chimeran Hybrid.

Advanced Hybrids are much more durable than traditional Hybrids. They stand around seven feet in height and serve as elite commandos, sometimes leading even Steelheads into combat. Advanced Hybrids are also equipped with very heavy armor and eye masks, as well as the Bullseye Mark II. Every aspect of their general physiology has been tuned to grant them extreme levels of performance over standard Hybrids. They must be outfitted with specialized cooling units to ensure their core body temperature doesn't climb uncontrollably during the heat of combat. These creatures are known to be incredibly strong in groups.

Advanced Hybrids are only encountered in the level Tower. These Hybrids wear six specialized cooling tanks that are narrow and streamlined.

Advanced Hybrids appear to be a more heavy-set Hybrid, are shown to be even more agile than the standard Hybrid, and sport heavy armor and a Bullseye Mk. II. They seem to have taken on a greater role in the Chimeran forces by the time of the invasion of America. Instead of just guarding the Chimeran Towers, they can be seen in small numbers leading other Hybrids, usually working alongside Steelheads.

Though they guard the Chimeran Flagship, they were not seen on the battleship over Orick, California. This may indicate that they are deployed as elite guards to regions that the Chimera have a special interest in: Twin Falls being the chosen entry point into the Liberty Defense Perimeter, Chicago having a tower in the area, Holar also having a tower in the area and as well as being the chosen area for the construction of the "Prometheus Weapon", and Daedalus' Flagship for obvious reasons.

Advanced Hybrids replace all normal Hybrids starting with in Lost and Broken (although they appear first on the first mech ride after Grayson destroys the second "power station"). They all wield Bullseye Mk. IIs, and are much bolder compared to normal Hybrids. If the player is pinned in cover for too long, there is a considerable chance one of them will run right beside and melee the player.

The Advanced Hybrid, unlike other games, are commonly armed with Hunters. As usual, they are tougher than regular Hybrids and far less common. In Burning Skies, their heat stacks are just as vulnerable to explosion as those of regular Hybrids, and are much larger than in other games. 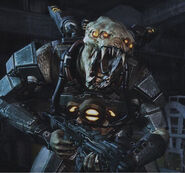 An Advanced Hybrid in Resistance: Retribution.